The Girl Who Circumnavigated Fairyland in a Ship of Her Own Making (Catherynne M. Valente, 2011) 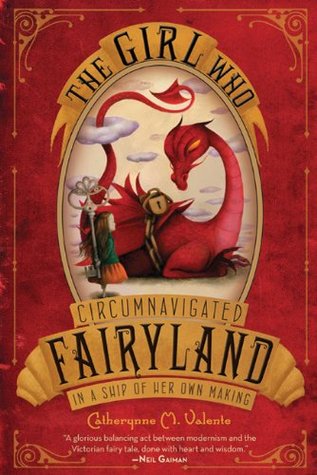 Read as part of the Fairy Tale Retelling Challenge.

Twelve-year-old September lives in Omaha, and used to have an ordinary life, until her father went to war and her mother went to work. One day, September is met at her kitchen window by a Green Wind (taking the form of a gentleman in a green jacket), who invites her on an adventure, implying that her help is needed in Fairyland. The new Marquess is unpredictable and fickle, and also not much older than September. Only September can retrieve a talisman the Marquess wants from the enchanted woods, and if she doesn’t . . . then the Marquess will make life impossible for the inhabitants of Fairyland. September is already making new friends, including a book-loving Wyvern and a mysterious boy named Saturday.

I’ve seen this flurry around in the bloggosphere for a while now and have been very curious to see what it was actually about, so when I got the chance to borrow it from a friend I snatched up the opportunity. I am glad to say that I was more than pleasantly surprised and had a great time chuckling at Valente’s quick wit and humorous way of writing. However, I will also say that I think you will need a flair for the strange and peculiar to find this an interesting read, because it is a bit different, but to me that was what made it so special.

Some might say that the story of the girl September travelling to Fairyland does not classify as a fairy tale retelling and would partly agree and partly disagree with them. On the one hand I see it as a completely original and unusual adventure story that takes place in a Fairyland, while on the other hand I see some characteristics of The Wizard of Oz as well as bits and pieces from Alice in Wonderland, and therefore I would deem it a fairy tale retelling.

“One ought not to judge her: All children are heartless. They have not grown a heart yet, which is why they can climb tall trees and say shocking things and leap so very high that grown-up hearts flutter in terror. Hearts weigh quite a lot. That is why it takes so long to grow one. But, as in their reading and arithmetic and drawing, different children proceed at different speeds. (It is well known that reading quickens the growth of a heart like nothing else.)”

I was quite taken with September as a character from the beginning and perhaps that was partly due to the narration, because even though it was a normal adventure narrator, it still painted quite the innocent and yet honest picture of September and highlighted both the good and the bad sides about her, thus making her seem more real in an unrealistic world. I loved the adventure she wanted to experience, because isn’t that the adventure every child wants to go on? To leave the dreariness of their daily school life to talk to witches and befriend friendly dragons – that really aren’t dragons at all but really wyverns, which are much more friendly in reality.

“The key entered the Autumn provinces far too late but followed the trail of September’s memory into the Worsted Wood. There, it met with the Death of Keys, which is a thing I may not describe to you. It is true that novelists are shameless and obey no decent law, and they are not to be trusted on any account, but some Mysteries even they must honor.”

This was a book I read in very few days and that was because the adventure caught me and carried me with September, I flew with her on her Leopard and I sailed with her in her underthings while her dress was her sail and I (almost) cried with her when she was sad. The language enthralled me so that I felt almost cheated when it was over, because I wanted the story to continue and I was sad that my time had run out of its clock.

Now I can only look forward to spring when September has to return to Fairyland, because that is the way with the Ravished, and there are still plenty of adventures for September to solve. I for one am willing to follow her through Fairyland one more time, to be entertained joyfully by her and her narrator.

The Beast Within (Serena Valentino, 2014)